Many thanks to writer Vanessa Berry for her compelling piece ‘Internal Logic’ for the ‘Colour & Form’ show.

At the end of the hallway at the entrance to the gallery hangs a screenprint by Sydney Ball. Canto XXI is a radiant orange square, which frames a circle of a softer orange, which further frames a stripe of ultramarine. The colours are arresting, their incandescence constrained by the stillness of the precise, geometric forms. It is a distillation of planetary energy, perhaps, or a pattern underlying a mathematical process: one of the gifts of abstraction being the openness of interpretation it bestows on the viewer.

Ball’s Cantos series, initially produced in New York in the 1960s, are landmark works of abstract painting. They were named after an epic poem by Ezra Pound which the poet worked on for more than fifty years. It is fitting for them to be a reference point for these works by Ball, for Ball’s Cantos also set the trajectory of his life’s work: his preoccupation with colour and form.

The two screenprints from the Cantos, produced by Ball in 2003, are something of a lynchpin for the Colour and Form exhibition. The exhibition combines works from Australian abstract artists of the 1960s – Sydney Ball, Michael Johnson, and John Peart – with contemporary artists working with abstraction in painting and sculpture. The three 1960s artists introduce a range of forms of abstraction, from the formal geometry of Ball’s Cantos, to the textured and organic shapes and colours of John Peart’s 1965 acrylic work Untitled #982, and the dynamism of Michael Johnson’s Collins Street #4 and its dashes and drips of colour.

In counterpoint to the historical precedent of representational painting that preceded it, abstract art offers no “window on the world”. It is an opaque viewing experience, an opportunity to look at the materiality of the artwork rather than through it. Nonetheless, abstraction suggests an internal logic: within the boundaries of the work viewers navigate form and colour in sensory and associative ways.

Jonny Niesche’s Personal Cosmos builds on the immersive, floating effect of a colour field painting, using the reflective and shimmering surfaces of mirrors and voile. The viewer is reflected in the work, shadowed within the pink cosmos, visually becoming a part of it and moving within it. Niesche’s sculptural work Cadence loop #10 shares this shimmering quality. The zigzag strip of steel has been painted an iridescent purple-blue which changes in hue as you move past it, and the light angles differently on its surface.

Other works invite a different method of navigation. Sean Meilak’s sculpture series Arrangements, six collections of geometric and architectural shapes, plays with scale so the viewer, too, feels a telescopic shift in perspective. These could be models of ruins or monuments. Or they could be the elements of a visual alphabet, and each arrangement a phrase or a sentence: Meilak’s process is to cast the elements individually, and to compose the arrangements during installation. Each arrangement has the sense of a light touch, of elements drawn together in the moment.

Intuition was also an important part of the process for Celia Gullett’s painting Geometric Abstraction XXI. Gullett uses layers of oil paint to build up a luminous surface, inspired by medieval works on wood. Her use of colour is often intuitive, developing as the work progresses and one colour leads to another. Here she uses a geometric motif of simple, slightly-overlapping shapes. At the overlapping edges the colours change, and the forms seem to embody the shape of a quiet thought.

Abstract forms heighten contemplation, and can suggest a way of thinking as much as a discrete thought. This way of thinking can be playful and indeterminate. In Tomislav Nikolic’s I don’t intend to understand, fields of delicate pastel tones resolve into lines of darker colour within the bright blue of the painted frame. This balance of nebulousness and resolution hints at a thought-state where ideas float, sometimes coalescing, other times drifting. This thought-state contrasts with those suggested by more defined geometry, such as Belle Blau’s Whole Unto Itself, where strong lines create clear boundaries within the space of the canvas, as they open it up into an illusory depth.

Another work of tight geometric composition is Ron Adams’ Lucky Strike for Nicola. Adams’ work takes shape from influences and relationships: in this case the box of matches that is emblematic of his friendship with the artist Nicola Smith. The rows of pale stripes with black tips are interrupted by one varying segment of red, the one unspent match. The red glows with potential, tempting the eye in the same way one’s fingers would reach for the last remaining good match in the box.

The influences that shape abstract work often remain only as the lightness of resonances, but can provide a rewarding insight into the works’ intentions. In Smoker Series – After Guston, Madeleine Preston uses shapes from, and the lung-like pink and black colour palette, of Phillip Guston’s Nixon-era paintings. This establishes a visual connection between two eras of American politics: the Watergate crisis of the 1970s, and the contemporary American political situation of the Trump administration.

The resin sculptures of Kate Rohde also engage with the idea of corruption, taking influence from Adolf Loos’ argument, in the 1913 essay “Ornament and Crime”, that excess in design can have a corruptive influence on society. Rohde’s florid bowls and vases have a gleaming, scampering vitality. Each vessel seems to burst forth with ornamentation, a challenge to the neat boundaries of the object.

For all their variations in style, artists who work with abstraction use colour and form to play on our associations, transposing our thoughts and perceptions. Sometimes this is an immersive and quiet experience, and other times an exuberant one, and often our engagement is one of transcendence. The works in Colour and Form carry us into their internal worlds, as they are drawn into connection, across the decades. 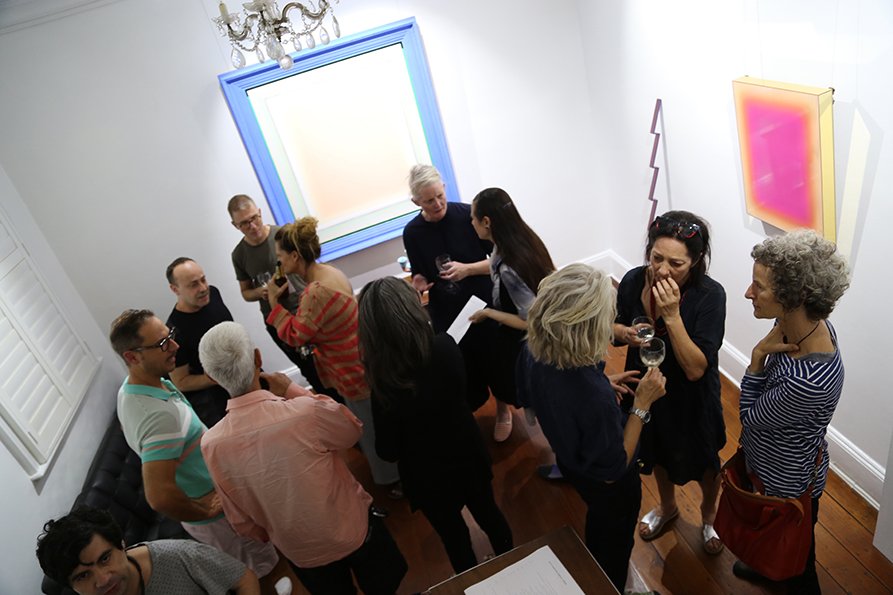