16.04.14
Though shying from the preconditioning influence of an overwrought curatorial theme, Home@735’s exhibition 16.04.14 certainly facilitates a diverse interrogation of the nature of, and our relationships with, the places and spaces we inhabit. This broad curatorial theme marries particularly well with the Home@735 surroundings; the gallery itself renegotiating the oftentimes distanced, formal experience of art precipitated in a more traditional context. Merging the exhibition space with a domestic sensibility (being the home of owners Anthony Bautovich and Madeleine Preston) the aptly named Home@735 forges a far more intimate and far less intimidating engagement with the works on display.
Angela Welyczko’s crisp photographic series Waiting takes seemingly innocuous images of medical waiting rooms as a platform to consider associational tensions attached to physical sites. Disconcertingly barren in their lack of human presence and severed from the functional capacity in which the waiting room is typically encountered, Welyczko’s photographs reflect on these spaces as particularly charged liminal zones. These largely nondescript rooms mark the precipice between unknown and diagnosis, stimulating potent emotive responses stretching palpable anxiety, boredom, anticipation, ambivalence and frustration.
Similarly exploring responses to the immediate environment, ceramicist Anne Marie Jackson’s warped, bowed vessels are the result of placement in different surroundings, allowing for the literal imprint of the conditions on the pliable clay. Interested in the relationship between forms and the spaces they occupy, the smooth, unembellished surfaces of Jackson’s pieces become subsidiary to their shape. Deviating from a preoccupation with symmetry and surface decoration often associated with the ceramic tradition, the emphasis of Jackson’s work is instead the strikingly corporeal, distended quality of the forms.
Contributing two series to the exhibition, Paul Wells’ practice is informed by elementary exchanges between people and spaces. Wells’ piercingly personal photographic series Dwelling consists of six large-scale pure pigment prints capturing the gritty precipitate of a friend’s bathtub in the aftermath of her passing. These images stand testament to the rudimentary exchange between people and their dwellings. As architecture provides shelter and delineates our sense of physical self and scale, the palpable transmission of our bodily presence animates these spaces with meaning and memories, suggesting the two are not as discontinuous as may first appear. Hung in the close confines of Home@735’s upstairs landing, the subtle, muted quality of the prints resonates with the tenderness of the images they capture.
Departing from responses to the physical environment, Kirsten Drewes’ mixed media series The Myth of Sisyphus instead broaches the psychological, interrogating the conflicting rational and emotional pillars of human behaviour – a philosophical interest the artist attributes, at least partially, to her German sensibilities. The rational takes form as vestiges from familiar workaday systems, snippets of bus tickets, schedules and playing cards overlaid with the abstract, calligraphic and uninhibited gestures of the emotional; lines freely drawn by the artist’s less dexterous left hand. In juxtaposing these distinct forms, Drewes’ work is imbued with an immanent, and particularly engaging dynamic tension.
Ian Andrews’ video work City of Light responds to the ‘non-place’ of the urban utopia, specifically that envisioned by the 1939 New York World’s Fair. Combining archival images of the fair (traversing its immense, experimental architectural constructions, dioramic displays of industry and meticulously choreographed pageants of human athleticism) with an immersive, humming high frequency audio reel, City of Light emulates the overwhelming phenomenological experience of the event, one saturated with the ubiquitous promise of a technology-fuelled nirvana.
In spanning responses to the immediate, tactile environment to the far more abstract realm of ‘non-places’ and the psychological interior, 16.04.14 offers an expansive reflection on the experience and lasting resonance of encounters with various sites.
words by Lauren Castino 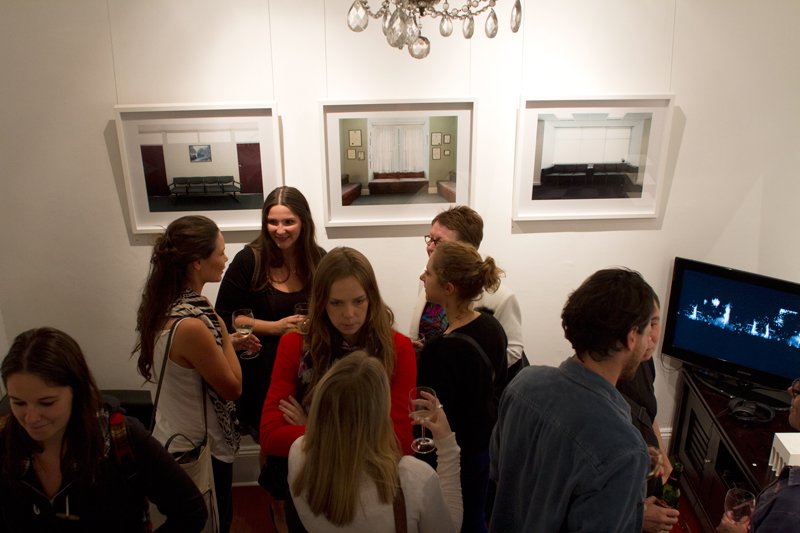