Many thanks to Susie Smith for her review of our 09.05.18 exhibition.

Liminal spaces and shifting states of being trace moments of mediation, transition and absorption throughout Home@735’s exhibition 09.05.18. Assembled together, each of the five artists’ works emanate impressions of presence and absence.

Janet Haslett’s series Cy in the Centre offers a familiar rumination on this theme. Visitors to last year’s Cy Twombly retrospective at the Pompidou form her subjects, as she paints the process of looking. Almost all see the Paris exhibition through the lens of their phones – backlit and bright on the screen and mediated by that small blockade at arm’s length. Haslett places the scenes before us as a simple statement of observation, without a moralising refrain. These are moments captured with her camera during her own process of looking, and reported later in the studio. Rapid and small brushstrokes delineate the spaces within each canvas to render each image a fleetingly glimpsed scene. Through the muted palette of grey, the rectangular spaces of the galleries and works begin to slide in a slippage of layered surfaces, like losses to the visual periphery beyond the screen.

Nearby, Nancy Constandelia’s colourfields on French grey linen form poems in blue. Subtle gradations of colour are the result of a single, loaded brush drawn across the canvas, yielding less and less paint to the surface. Exposed lines of canvas bring us back to the surface of the paintings from a recession into depths of colour and remind us of the physicality of the paint. Constandelia’s fascination with the materiality of her medium is made clear through the textural, smudgy-fringed fields of ultramarine in Epoch I and Epoch II. The ultramarine works on display are translucent, both absorbing and emitting light. In contrast, The Vanishing performs an absorption through a deeply layered recession of blues and blacks. Through these works, Constandelia considers how light, colour and the material of paint itself act together to create an artwork.

Downstairs, the ambiguous spaces within Anthony Cahill’s paintings build landscapes of the mind through snippets of memory. The abstracted spaces unfurl through layered planes of colour. Cahill plays with colour discords, layering dappled colours over others and pushing opposing brights towards new harmonies. Cahill places his figures in these moving spaces in enigmatic and imagined interactions. All at once, the figures are part and apart from one another and the space around them – blending in through tonal harmonies and dislocated by the abstraction of their surrounds. Cahill paints the disjunctures of modern life in a reverie on our experiences in this world of loose digital connections and urban distance from nature. In Souvenir one figure extends the offering of a feather to another as if in memory of the ghostly bird perched nearby. Elsewhere the unknowable majesty of nature is palpable in the solid, shifting spaces which hold the figures’ gaze.

Morphing and in flux, Jenny Orchard’s hand-built earthenware creatures form a polemic against human interference with the world around us. The products of genetic testing, Orchard’s Interbeings have man-made ‘jumping genes’ which continue to change their nature, and are genetic interferences based in fact; on mice with sprouting boar’s tusks and human ears, created to be tested on. The Nigerian multi mud creature is a spiky form of moving limbs, spines and spots with pursed lips, nearby the triffid-like copper green Vase 1 stands sturdily on four legs and across the stairwell the mohawked Punk Dog curls his toes and looks on through leaf encircled eyes. Orchard draws on the African myths of her childhood in Zimbabwe in works such as Creature from the Ghostlands, an ethereal cloud-like figure emblazoned with a metallic lustre glaze, remembering the copper mines of Zambia through its copper and manganese glow. As escapees from the lab, Orchard imagines her creatures building their own societies and environments around their otherness.

Elsewhere, inside the booth Beccy Tait’s looped video work Hypergogia enacts the sensory experiences of night terrors through a split screen of enveloping horrors. As a sufferer of night terrors, Tait’s year-long exploration of the sleep disorder has proven to be a cathartic artistic process. Viewed within the small dark-room beneath the stairs at Home, Tait wished to recreate the confines of her world of sleep for visitors. The images are paired with a ghostly soundtrack of thrums, taken from scientific recordings of planet vibrations in our solar system. In the videos Tait presents figures lost, blindfolded, drowning and decapitated. Hands grasp from unseen corners and a dreamscape of familiar themes make reference to a floating Ophelia, monsters in a wardrobe, fears glimpsed in a mirror, and the soft, golden figure of Tait in an Edwardian dress running in the night recalls a history of the Australian Gothic.

Through the exhibition, Home@735 threads together these liminal moments of flux to focus thought on the thresholds of experience. 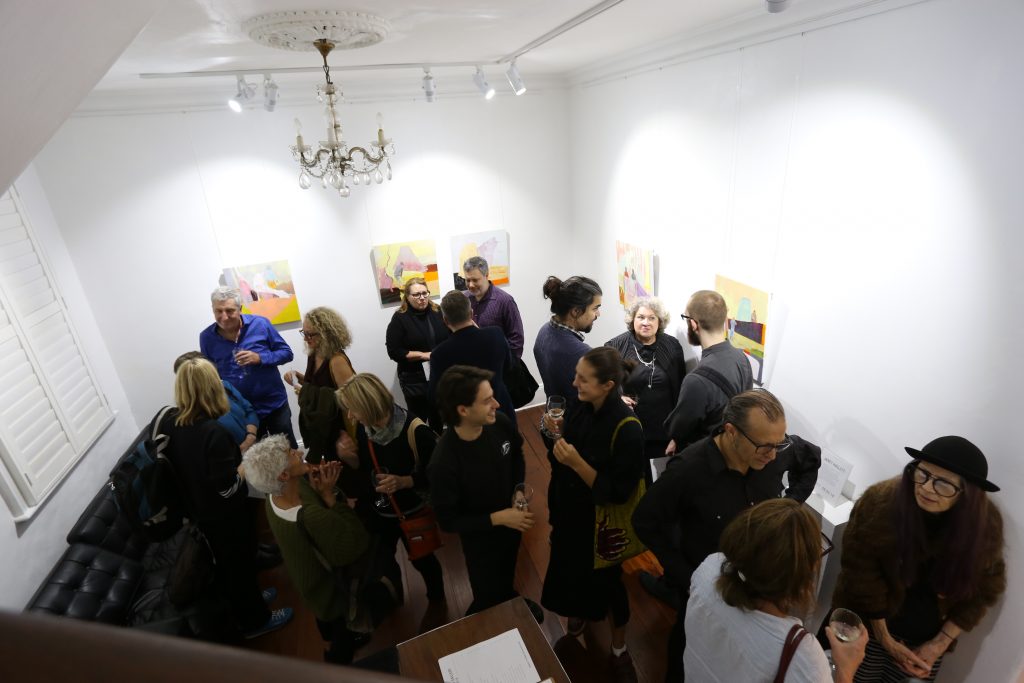