Many thanks to arts write Naomi Riddle for her review of our current exhibition.

In his seven-point manifesto, In Praise of Small (2016), David Joselit writes that ‘MoMA exhibits something like 1% of their collection at any one time.’[i] Such a figure (calculated by comparing the number of works on view with the number of objects in the collection) highlights that the purchase of artworks by museums and institutions doesn’t necessarily equate with greater accessibility. It also prompts the question as to who determines which objects from such an insurmountable archive should be on display at any given time. And the idea of collector and collection becomes even more muddied when considering the sale of art to private buyers—contemporary and traditional artworks often disappearing from view once purchased.

Through building the 2018 Invitational exhibition around chosen pieces from the private collection of Sydney consultant and art collector Kate Smith, Home@735 reverses this process. Here the works of Sidney Nolan, Tony Garifalakis, Justin Mortimer and Ricky Swallow are made visible, placed alongside responsive or likeminded pieces by emerging and established artists. There is also the additional aspect of such works being presented in a gallery that is decidedly not a white cube or an institution, but rather one that sits between the public and private—Nolan’s Landscape with Ned Kelly (1982) is hung in a living room, Garifalakis’ Untitled #14 (2014) from the ‘mob rule (family series)’ is placed above stairs, whilst Swallow’s watercolours of the Kelly Gang are positioned along a corridor. The weight and feel of these works shifts in such an in-between domestic space: you’re allowed to get up close to the brushstrokes; you can examine the precise details of Kelly’s armour.

The exhibition itself can be divided into two parts: the downstairs section responding to the Nolan and Swallow works, and upstairs more concerned with figurative portraiture. Mortimer’s painting entitled Donor VI (2014), which depicts a blue-bruised figure lying prostate on a bed, provides the thematic focus for the upper space. Many of the other works are similarly preoccupied with corporeality, where the abject is combined with a sense of gentleness and vulnerability. There is Garifalakis’ disembodied opened mouth with the too-white and too-straight teeth, the sequestered face of Nuan Ho’s Nurse (2017), and the chafed forearms of William Reinsch’s Shame Study (2017). The self-portraits of Vanessa Stockard, Natasha Walsh and Yvette Coppersmith also suggest an open-faced intimacy, whereas Sassy Park’s sculptural piece, Men’s Group (2017), includes a terracotta head on its side—a kind of decapitation of the illustrious Victorian statuette.

But it is the arrangement of the downstairs gallery which suggests an awareness that the significance of a collected artwork—particular one as iconic and recognisable as Nolan’s—is determined by its relationship to the works placed beside it. Here Jason Phu, Dennis Golding and Deborah Kelly have all produced responsive pieces that directly engage with both Nolan’s ‘master’ status in the Australian canon, and the obsession with Ned Kelly as a go-to-figure of national identity. Phu’s Lao fucking up Ned (2017) sees the bushranger’s head clamped in the jaws of Laozi’s dog, whilst Kelly repurposes Nolan’s commissioned endpapers in Junee Archival (Sausage Party Showdown) (2018), slicing and overlaying the ponderous documents of art history into ironic collage.

Indigenous artist Dennis Golding’s photographic print, Among Others (2018), depicts a small clearing ringed by eucalypts. A series of capes has been affixed to the trunks, with each cape then painted with cultural symbols that mark out territories and sites. Here the photograph becomes a haunted document of visual signs—signs that oppose the primacy of Kelly’s helmet, and expose the colonial narrative underwriting Nolan and Swallow’s series of works.

The considered positioning of the 2018 Invitational is a reminder of the value of small and independent spaces gaining access to ‘canonical’ works, and indeed the idea of the canon itself: such markers of standards (and the collections that house them) cannot be fixed or closed—they must be continually recast. 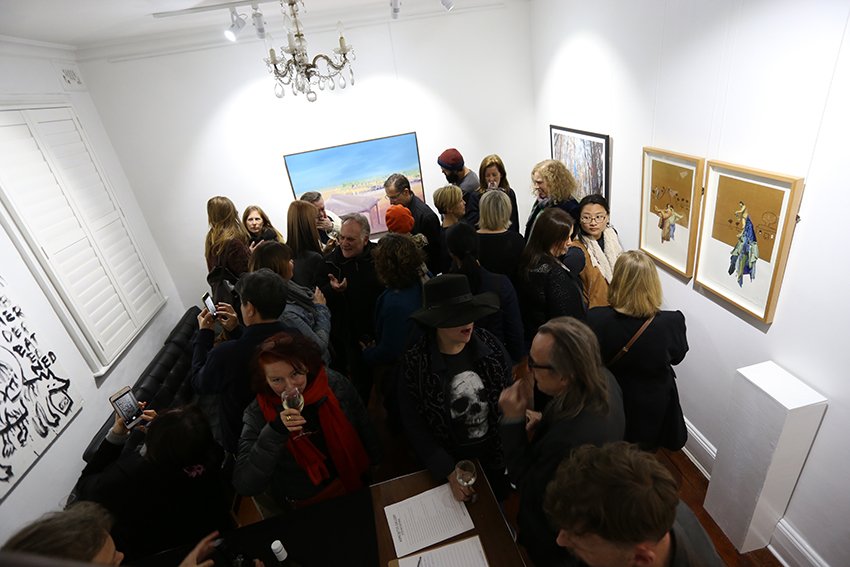