On Wednesday 21st August 1968, Melbourne’s ‘The Age’ newspaper ran a small article tucked to one side of page two. Headlined, On Moon in 1969 ‘possible’. The brief snippet from Washington reported the growing probability of a manned Lunar landing by Apollo spacecraft the following year. The same day, splashed across the front page, an ostensibly more important domestic announcement heralded the opening of the new St Kilda Road premises of the National Gallery of Victoria (NGV).[i]

Amidst much heady fanfare and the palpable optimism of the era, the inaugural exhibition named The Field welcomed crowds at the new NGV. The aptly titled display included works by forty young Australian artists – most of whom had been introduced to American ‘post-painterly abstraction’ by virtue of their overseas travels or via imported exhibitions. By means of The Field, this new generation of artists entered the mainstream with a selection of colour field and hard edge paintings, shaped canvases and sculptures.

Fifty years on The Field is still regarded by many as a ground-breaking show. Its lasting relevance is visible in Colour and Form – which forefronts the work of three of The Field’s original group of painters. Work by Michael Johnson, Sydney Ball and John Peart – the latter two artists having died in recent years– are accompanied by a larger party of next generation colourists namely, Ron Adams, Belle Blau, Angela Brennan, Celia Gullett, Saskia Leek, Sean Meilak, Jonny Niesche, Tomislav Nikolic, Madeleine Preston, Kate Rohde and Louise Tuckwell.

In the cosy confines of Home Gallery’s living room and hallways, Colour and Form’s intention mirrors that of The Field to, “make possible a considered judgement of the work of these artists seen in the company of their fellows and of stylistic principles they share”.[ii]. Curator Anthony Bautovich has juxtaposed the work of emerging artists with that of the three original artists, and grouped together unlikely old and new forms in shared spaces. Historical and mid-career painting and mixed-media works from Peart (1965) and Johnson (1987) respectively, are brought together with Ball’s duo of new-millennia screenprints from the 2003 Canto series (first developed in the mid-1960s), and over twenty recently-made paintings, sculptures and ceramic assemblages.

While five decades separate Colour and Form’s oldest and newest examples, the exhibition demonstrates the Australian artists ongoing regard for the international style originally evidenced in The Field. It modestly nods agreement with the proposition that art’s interest in unravelling the mysteries and potential of colour has never waned. At the same time, Colour and Form proposes contemporary means of exploiting and interpreting the genre.

Encouraging the idea of the movement’s continuum from its American beginnings Bautovich is interested in the parallels between Sydney Ball and American artist, Frank Stella. Favouring Stella’s reductionist style that represented a rejection of abstract expressionism – and drawn from the Canto series based on Ezra Pound’s epic series of poems of the same name, Ball’s Canto IX and Canto XXI are examples of this idea. While formally confined by the geometry of their respective circles, they shimmer with intense colour and a paradoxical sense of the shape’s symbolic infinity.

From the next generation of artists in Colour and Form, we can recognise homage to these pioneering artists being fuelled by the influence of contemporary culture. The transcendental effect of colour in Jonny Niesche’s immersive Personal Cosmos signals the work’s affinity with Mark Rothko’s painting of the 1940s and 50s. Rothko publicly insisted that he was attempting to find “a pictorial equivalent for man’s new knowledge and consciousness of his more complex inner self.”.[iii] On closer view – as Rothko himself preferred – the medium of Personal Cosmos is revealed as voile and acrylic mirror. This added dimension delivers a twist and endows the painting with savvy power to reflect the viewer in certain light, including when taking a selfie. Meanwhile Niesche’s zig zag adventures with Cadence Loop #10 (cyan to magenta) – constructed from steel and ‘flip flop’ auto paint that encourages angled viewing – suggest his ability to refresh and extend Rothko’s original concept as well as conserving it.

While it may seem obvious, it is worth noting that each of the artists in Colour and Form share a common and profound interest in colour and form, though each has their unique way exploring these elements in their art. Ranging from Adams’ pop-inspired painting and Preston’s politically-associated assemblages to Rohde’s exotic neo rococo sculptures, Colour and Form epitomises the expansion of the genre and the experimental attitude of the group as a whole.

Later this year The Field will be restaged in its entirety at the NGV. Though only a few will personally remember the heady optimism of Melbourne in 1968, it seems the possibilities for colour and form are increasingly timeless.

Image courtesy of Station Gallery and the artist. 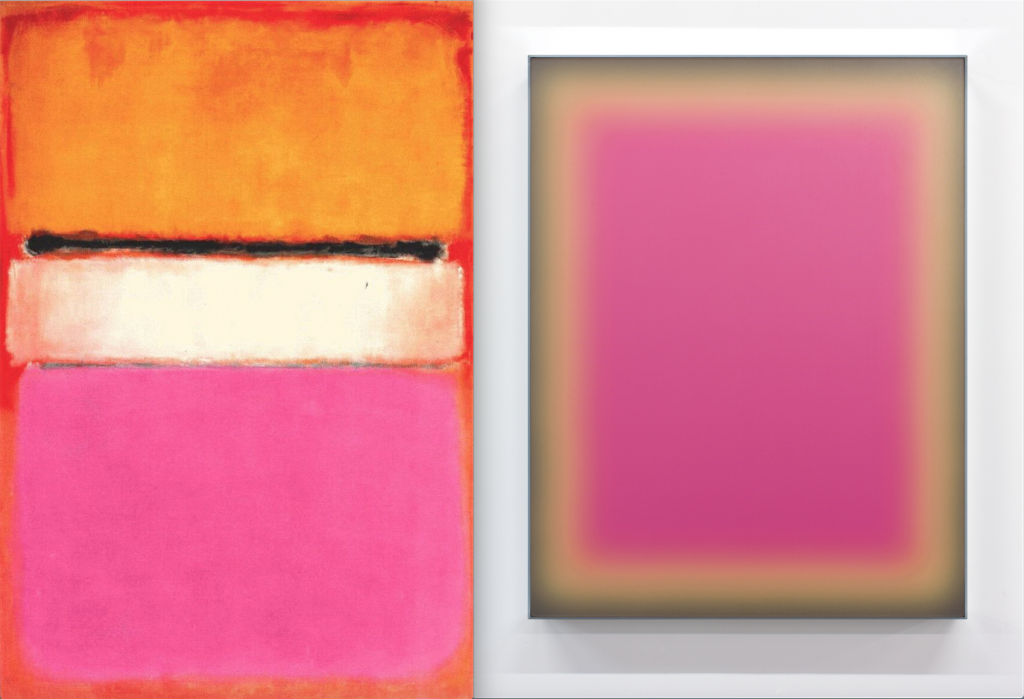