It’s with great sadness I inform you that my partner and co-director of Home@735 Gallery Madeleine Preston passed away on the 14th of March.

Many of you would be aware, Madeleine suddenly became unwell in July last year. She was taken to St Vincent’s hospital in a critical condition and not expected to survive. After three weeks in hospital, mostly in intensive care, Madeleine came home.

Over these last few months, Madeleine battled a number of symptoms including fatigue, but was able to push through and make the most of her days. She painted, made ceramics and got to finish the script for her short film, Darlinghurst Eats its Young – recording her narration just two weeks before her death.

We managed to get away to the South Coast for a number of short trips. Mad loved the ocean, catching up with friends and was energized by swims in the salt water pools we visited.

She enjoyed engaging with other artists and writers during her residency at Bundanon in February. The natural peace of the beautiful surroundings raised her spirits.

Most of all, Mad loved the visits, calls and messages from her friends. Those connections were precious to her.

Madeleine’s stoic nature was with her right up until the end.

I will always be thankful that we had these last few months together, but that doesn’t make today any easier. I miss her, and I always will… 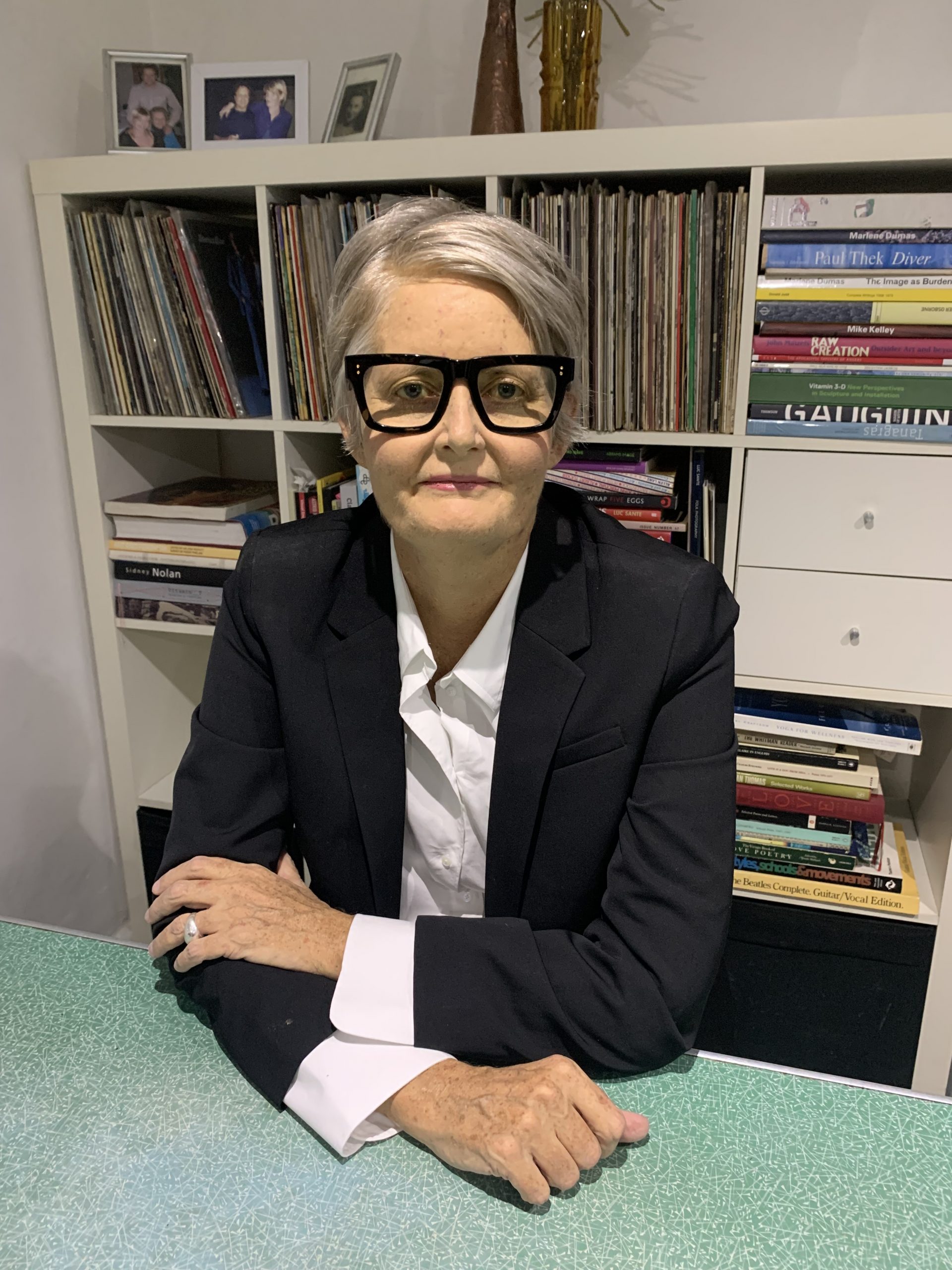 Home is pleased to announce our upcoming show opening in March will feature photography by Sydney based photomedia artist, Zorica Prulija. The exhibition will highlight a series of portraits of Zorica’s daughter and muse, Yumi.

In 2020 she completed a Masters of Art in Photomedia at UNSW School of Art & Design in Paddington. 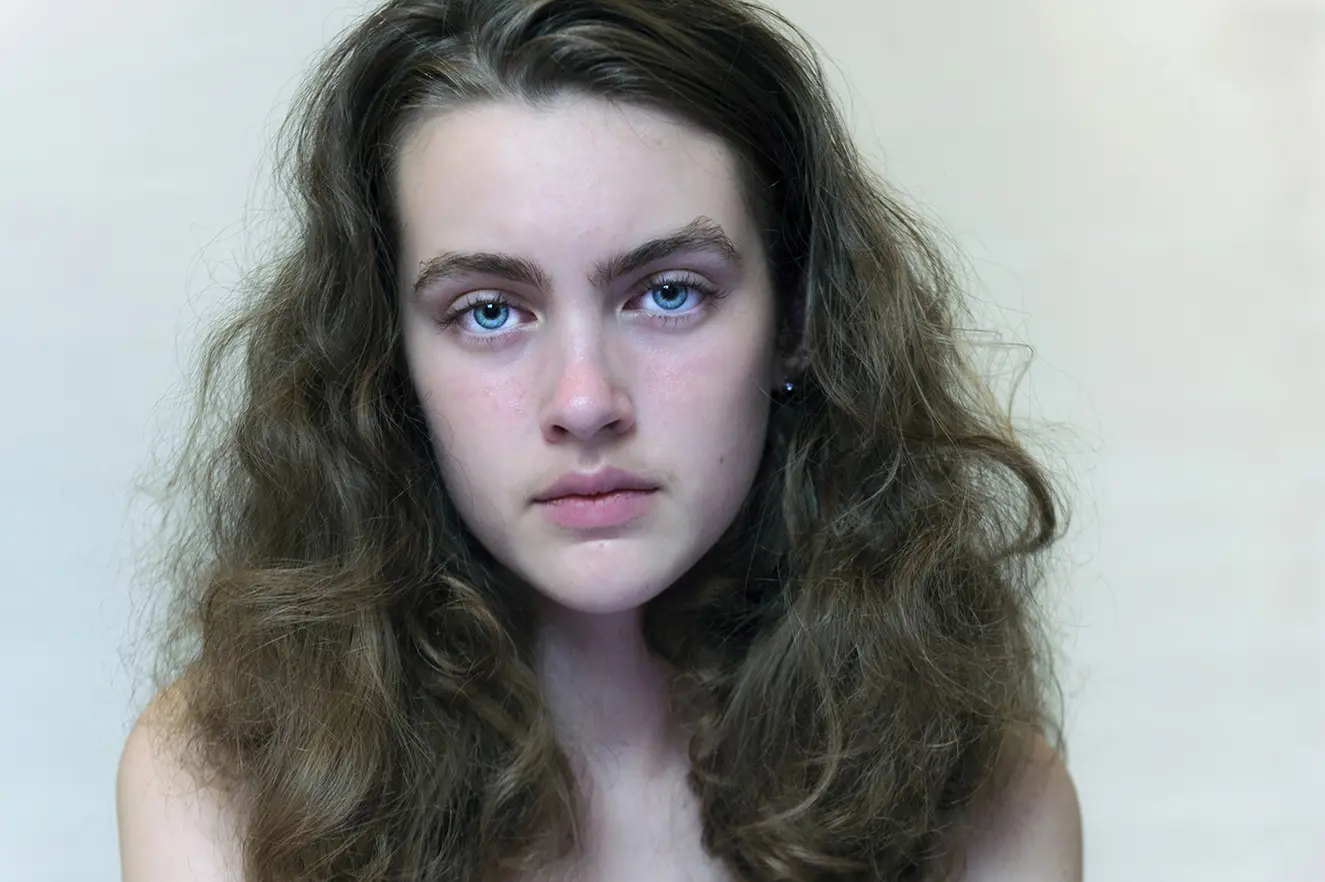 Home is pleased to be exhibiting new works by Samuel Massey in our 2021 program.

“…my art practice has come to be focused on the search for an authentic process. Many artists I admire have a distinctive style. By style, I refer to the relationship between their subjects and techniques. I believe artists that sustain distinctive practices find an honest way to paint. They find a method that reflects their temperament and enables the expression of their interests and influences. Regarding my paintings I would summarise my temperament as impatient yet persistent. My ever-lengthening list of influences has ensured the steady deepening of my respect for the materiality of oil paint. This respect leads to persistently searching for a technical mastery that aligns with my impatient temperament. I want to make better paintings with increasing ease. Paradoxically, it seems the way to do this is to continue raising my expectations of myself and continuing to broaden my technical experience. I am seeking a perfect, formulaic method and then critiquing it to the point of constant amendment. This technical pursuit leans into my preference for ambiguous subjects as it requires I bend subjects to fit the technical expectations I set myself. In this way the painting becomes the director of its own story…”

Home is pleased to be exhibiting work by Dr Peter Hill during February. Join us for the artist talk on Saturday the 6th of February from 2-4pm.

Glasgow-born Australian artist Dr Peter Hill has been creating what he calls “Superfictions” since 1989, when he first used fictional press releases to create New York’s Museum of Contemporary Ideas on Manhattan’s Park Avenue. This was supposedly the largest new museum in the world. Within the fiction, it attempted to break many of the rules of curation and museum display.
Since then, Hill has created not just the artworks but the fictional identities and CVs of over 50 contemporary artists, as well as Museum Directors, Philanthropists, Art Critics, Collectors, Gallerists, and – in his ongoing art-world fantasy The Art Fair Murders – serial killers.
At a populist level this project can be likened to the idea of the hoax or April Fool’s prank. At a more serious, specialist, level it deals with aspects of “falsificationism” from the philosophy of science (Karl Popper, Thomas Kuhn, Paul Feyerabend, Margaret Masterman) asking “how can we tell from mainly visual clues, whether any given statement is true or false?” Or can we only approach the truth, as in Popper’s conundrum of sighting white swans and black swans. One of Hill’s fictitious art collectives AAA (Art Against Astrology) interrogates these questions through
their on-going artwork The Museum of Doubt. The arrival of Donald Trump and the proliferation of Fake News has helped illuminate notions of doubt and certainty, and for the past four years Peter Hill has been on a world lecture tour called Fake News and Superfictions – brought to a premature end in 2020 by the arrival of COVID-19.

For this exhibition at HOME@735, Dr Peter Hill introduces the work of his latest creation Stickleback (born 1951). Like Banksy and Madonna, Stickleback is one of several artist-celebrities known by a single name, or mononym. Normally working from studios in Berlin, Shanghai, and London, Stickleback found himself stranded in COVID-lockdown in Hobart, Tasmania (where he was working on a still-under-wraps major project). Based at a luxury mansion in Sandy Bay, this veteran artist has produced 35 Provocative Text-On-Canvas Paintings that comment on the extremes of contemporary life (Trump, Johnson, Sturgeon, Morrison, Gillard) alongside esoteric statements made by a range of artists, past and present (Marcel Broodthaers, Werner Herzog, Donald Judd, Dorothea Tanning, Uccello, and Ennio Morricone).
Stickleback’s 1m x 1m paintings – already dubbed The Tasmania Suite – take their inspiration from 2020’s protest banners and placards, newspaper headlines, religious texts, art-historical quotations, and a range of contemporary and historical artists including: Tracey Emin, Jorg Immendorff, Anselm Kiefer, Linda Marrinon, Joseph Kosuth, and Colin McCahon. Stickleback’s work has been exhibited at the documenta, the Venice Biennale, the Sydney Biennale, and the Geelong Art Prize. He is also a character in Peter Hill’s on-going Superfiction (supposedly a novel and a film) The After-Sex Cigarette.
This exhibition at HOME@735 expands Hill’s ideas from The Art Fair Murders, with scenography that suggests an international art fair held in an “Art Hotel” in Cologne, during the run of the city’s main art fair in the nearby Kunstmesse. The setting is reminiscent of Spring 1883 held in Melbourne’s Windsor Hotel during the city’s art fair season. A selection of the 1m x 1m canvases made by Stickleback during 2020 lockdown will be exhibited at HOME@735 throughout February 2021. This selection will change on a weekly basis, mimicking the way many galleries at art fairs (especially during the 1980s) would quickly replace paintings or sculptures when sold in order to maximise their opportunities for sales. One of the intentions of Hill’s project is to contrast the politics of museum display with that of international art fair practices. His ambition is to eventually sell “readymade” art fair installations to museums and private collectors – using signage, carpeting, and language as signifiers. Within this framing device artworks will change regularly, often selected from storage by museum visitors.
Fragments of this project have previously been installed in The Sydney Biennale (MCA); AGNSW (Project Space); ACCA, Melbourne; Auckland City Gallery; and Museum of Modern Art, Oxford. 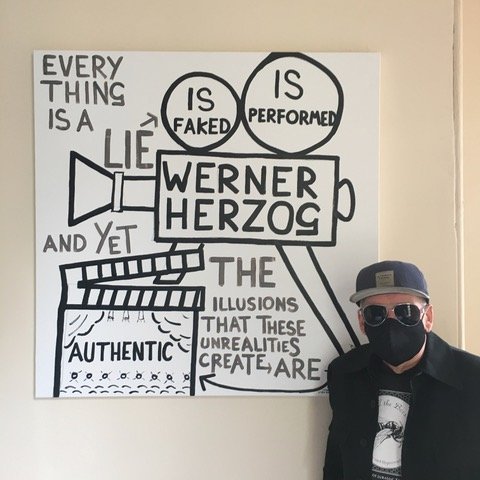 Home is pleased to be exhibiting works by Monika Scarrabelotti in our 2021 program.

Monika Scarrabelotti is a Sydney based artist who makes gestural figurative sculptures that engage with the human condition. Seeking to create works that are emotionally raw, her sculptures traverse the sensual and voyeuristic, engaging the spectator in an intimate response. Scarrabelotti completed a BFA and MFA at National Art School, and has a continued connection with art education through teaching sculpture at the Tom Bass Sculpture Studio and NAS. Scarrabelotti exhibits regularly and has a growing number of artworks in Australian private collections.

Home is pleased to be exhibiting a suite of new paintings by Chelsea Lehmann in October.

Chelsea Lehmann has exhibited extensively in Australia for the past two decades and has been the recipient of several awards, grants, local and International residencies.
Her most recent exhibitions include Persona (Flinders Street Gallery, Sydney, 2020); June (MARS Gallery, Melbourne, 2019); Bad Mannerism (Galerie pompom, Sydney, 2018) and The Articulate Surface (UNSW Galleries, Sydney, 2018).
She is a lecturer in Drawing at the National Art School and completed a PhD at UNSW Art & Design in 2019.

“The immediate appeal of Chelsea Lehmann’s work is the fluid, supple and sneakily perverse quality of her paintings, at once referential to artists of the past, but also to the presentation of the female form in our age of pervasive online pornography — a neat double act that lends this most traditional subject of figuration an undeniable and contemporary feminist edge.” – Andrew Frost, Art Collector Magazine, April-June 2020.

Pictured is Broken Embrace, 2020, oil on board.

The Forresters’ upcoming single release is a cover of the acoustic track ‘Never Too Far’ by the late and great Tm Hardin. The track will be released on itunes, Spotify and all online store and streaming services this Friday the 25th of September.
Photo by Laurent Perren. Design by Madeleine Preston.

“…complemented by Jess Ciampa on vibraphone and Charlie Owen on dobro, this evocative example of folk-leaning rock was mixed by US producer, Mitch Easter. The Forresters’ excursion into this folk classic is a sincere interpretation of a wonderful track by an underrated songwriter first recorded in 1973…”

Home is thrilled to be exhibiting new works from the studio of Joe Wilson and Chanelle Collier in September. The work including flags, collapsed chair, painted record covers, and solvent transfers on canvas; drawn from multiple branches of their current practice.

The Flags are a series of works refashioned from 1960’s vintage French tents. The material subs in for painted canvas, with colours associated to an infamous summer of love, and global civil uprising.

The collapsed chair, Unrest, looks at the chair as a system representative of an individual. Building and breaking become a means of abstraction. The function of the chair is lost by making it both painting, and sculpture. The push and pull between surface and structure is an inconsistent commitment to the object, and the mechanism of its reception.

This will be the first in a series of monthly online exhibition at Home.

Home’s co-director Madeleine Preston was interviewed about her lockdown lectures and her students creative responses to lockdown at the National Art School.

Written by Lissa Christopher, the article was published in the Sydney Morning Herald during the week. 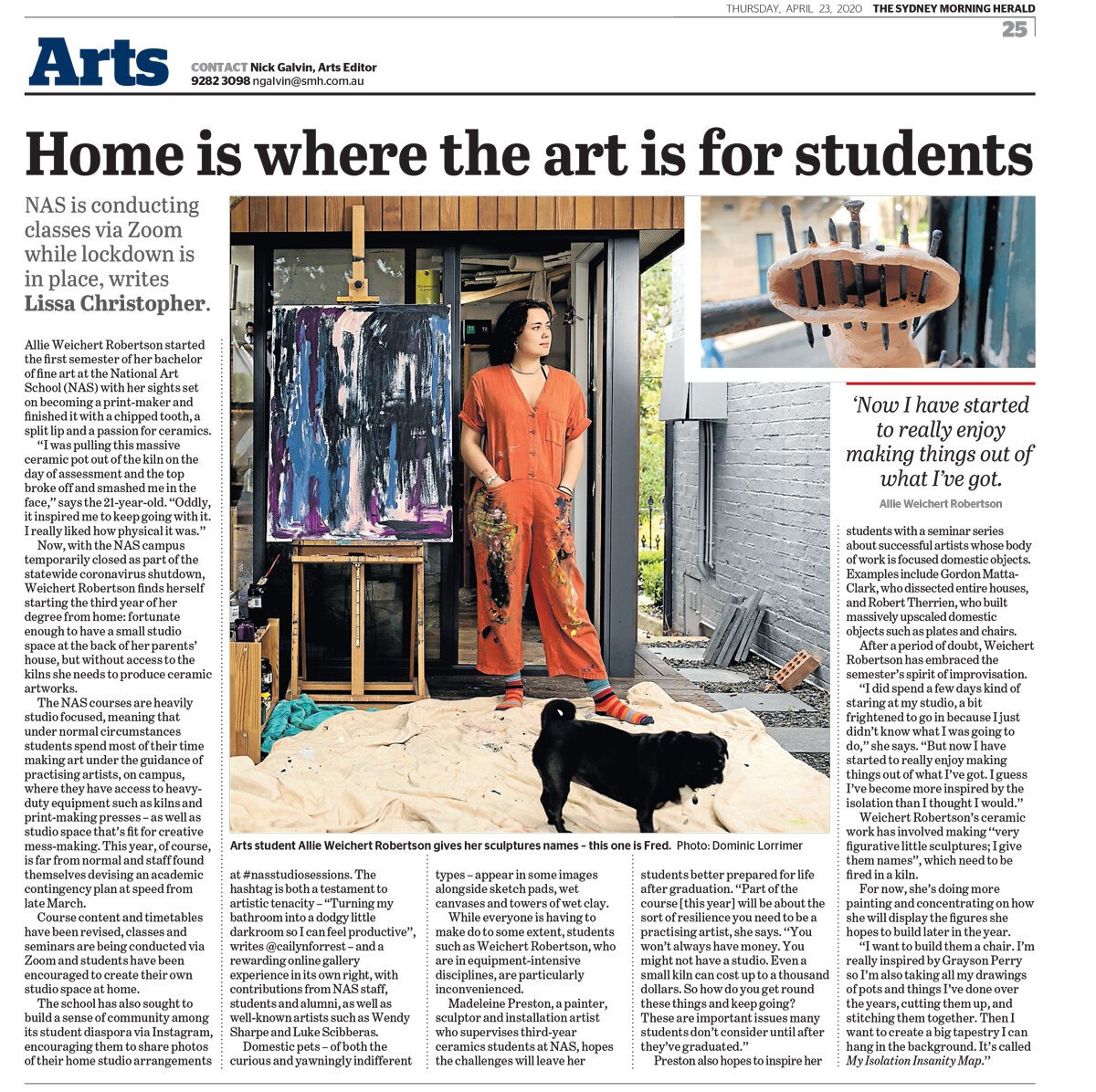 Home is pleased to be exhibiting a suite of new paintings by Mirra Whale in our ‘Pairings’ exhibition this Saturday the 7th.

Join us for opening drinks from 3-5pm during Art Month’s Greensquare/Waterloo Art Afternoon.

Feminist Fight Club addresses the gendered nature of materials and art practices, specifically the systemic art historical bias that assigns gender to materials and has resulted in some materials including textiles and ceramics relegation to less valued art objects.

Home is pleased to be exhibiting a suite of works by Brendan Vivian Smith in our 2020 program.

“…Smith literally rescues these wooden off-cuts from rubbish skips, repurposing them as artworks, which operate simultaneously as painting and sculpture. The use of quotidian materials is informed by Smith’s admiration for the Italian arte povera movement, with the furniture designer Enzo Mari being another significant influence…” from an essay by Hamish Sawyer.