15.02.14 – Meredith Birrell
Someone once said that when you enter an art gallery, you are, figuratively speaking, entering a director’s living room. In the case of Home@735, you are literally stepping into the living room of gallerist Anthony Bautovich and artist Madeleine Preston, who last year opened a gallery in their own home. This is an intimate and refreshing gallery space that is all the more welcoming for its minuteness.

I recently saw their latest show featuring recent art graduates from COFA, SCA and the National Art School. It comprises painting, video, photography, installation and ceramics. What could be a crowded assortment of objects is handled very well in the limited space available and the directors have thought a lot about the flow-through of the space and the deliberate placing of an object to offset another. For example on the lower level, a slip-cast bowl by Sarah O’Sullivan, a small table installation, Precious Assortment by Yang-En Hume and a painting on aluminium, Oily D’oyley by Caitlin Hespe generate something of a hushed conversation between each other and set the intimate tone.

Frankie Chow and Hespe are the two artists featured downstairs. Both artists’ work creates a sense of familiarity; Hespe’s for its use of the generic snapshot and Chow’s for the intimacy of her video performance. My impression of Hespe’s paintings was that although familiar, they were also far away, just escaping a firm grasp, like a fading memory. They were somehow vacant despite being full of description, yet that was also what made them poetic – the way in which they allowed the viewer to fill the void with their own narrative. Based on photographs of everyday moments, Hespe translates these images into washed-out traces, the forms simplified enough so that they shift between abstract pattern and concrete physical form. This is painting that explores the absences within the photographic image, its blatant insubstantiality, its link to memory, loss and nostalgia. Yet this is also painting for painting’s sake; the enjoyment of brush and medium is evident in Hespe’s fluid mark-making.

Intimate and odd in a different way is Chow’s video work Split (2013). Chow’s face intently gazes at us and each time she blinks, a split-second flash of her naked body appears, then we return to the focussed internalised watching. The subliminal images are like those momentary flashes in our own heads, the fragments of memories, sensations and images that make up our internal world. Chow has talked of her interest in camgirl culture, a genre of homemade internet pornography that has led her to explore the fissures between the aesthetics of desire and sexuality (in this case, self-defined) and the social realities of isolation and trauma as experienced in time and through memory. It is an intense piece that unwittingly involves you in its act of voyeurism and is so elegantly simple in its execution that at first you are not aware of your own complicity.

Climbing the stairs, you encounter the photographs of Jingjing Ma, a recent graduate of COFA. Dealing with memory-traces of a different sort, Ma’s body of work, The Lost Numbers, is a study of disused storefronts along Canterbury Rd in Sydney’s west. They are subtle, unassuming and captivating. Their strange power is enhanced by their precise but unframed edge and matt surface, which allows them to become almost part of the architecture of the room. Ma also produced a book of this series, which forms a lovely complement to the larger works. In this he writes, “I frame only the most relevant details in the photographs, avoiding any deliberate transformation and distortion in the hope of creating portrait-style photographs that exhibit the most intrinsic details and traces of memory and history.” As you look, (as in Hespe’s work, at very familiar imagery) the buildings become more and more anthropomorphised and begin to take on their own character. Buildings especially carry very strong meanings and associations, filled as they are with our dramas, our loves and our industry, qualities Ma has captured in these quiet photographs.

Along the upper corridor is the work of Yang-En Hume, comprising mixed-media drawings, framed photographs and a collection of jars containing dolls heads in brown liquid, like vitrines from the laboratory of Frankenstein. Hume is interested in the way in which dolls have historically been used as aides to prescribe socially acceptable roles for little girls – teaching them about modesty, compliance and the importance of beauty. There is nothing modest, compliant or beautiful about Hume’s use of dolls, which she dismembers and defiles in her re-configuring of their social function. These uncanny specimens are called such things as Lipotes vexillifer and Incilius periglenes. I assumed this was Hume’s own pseudo-Latin, but lucky for Google! These two examples are actually the Chinese river dolphin and the Golden toad, found in Costa Rica. Their literal meanings are not the point however, but rather they link these works to notions of the strange. The issue of sexuality is as unavoidable in Hume’s work as in Chow’s and yet perhaps more disturbing for its distortion through the prism of the little girl’s plaything. Hume questions and challenges what we teach children about their bodies, sexuality and especially, I would argue, privileged Western notions of beauty.

At the end of this corridor is an in-built glass cabinet, in which are housed (and beautifully lit), a collection of Sarah O’Sullivan’s ceramics. More are on display within an art deco cabinet of panelled glass on the upper landing, Suspended in these transparent spaces, O’Sullivan’s predominantly white ceramics seem held in light and air, apt for their predominantly bird-centred themes. The first thing to be said about these works is their astounding craftswomanship – whether slip-cast, modelled, carved or hand-painted, all the works are executed with incredible sensitivity and control. Much of the work ponders the life and forms of birds, with many from Flight Series (2007-08) and some pieces from 2013 such as Black Swan and Black Feather Bowl, both hand-painted porcelain vessels. There is something in O’Sullivan’s contemplation of the natural world that makes me think of our degraded environment and the struggle for life of some of our most vulnerable creatures. Both Remnants (2013) and How to Identify Dead Birds (2013) are two works that provoke this response. Remnants, a work of porcelain spoons painted with birds’ claws and supported by a found timber frame in the shape of Australia, hints at the continual destruction of our natural environment. How to Identify Dead Birds uses the language of classification and similarly seems to mourn the loss of species that results from unckecked human growth.

You would not think so many works could co-habit so successfully in this small and homely space. Credit must go to the sharp curatorial eye of the directors as well as to the strength of the work itself. Here, you can get intimate with the work, get your nose right up against it (which is unavoidable if you’re there for an opening) and feel what it might be like to live with the art, all around you, part of the fabric of your life. This smallness of this gallery belies its grand ambition; size does not equate to significance. The work on show here is sophisticated, bold and intelligent and it is great to see it supported by this relative newcomer to Sydney’s gallery scene. 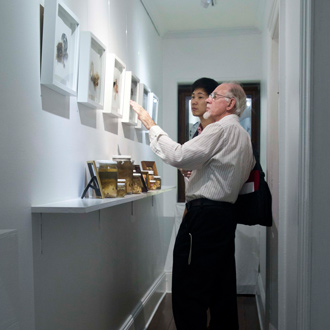 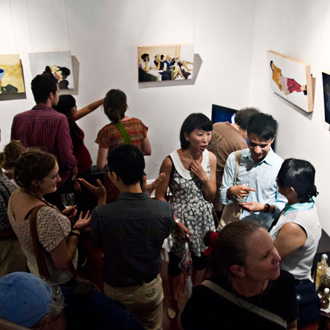 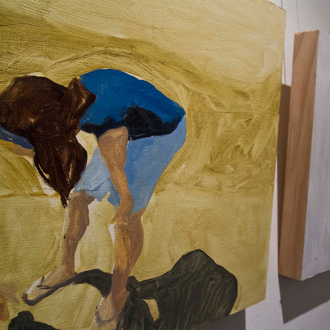 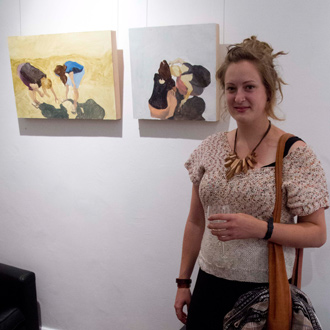 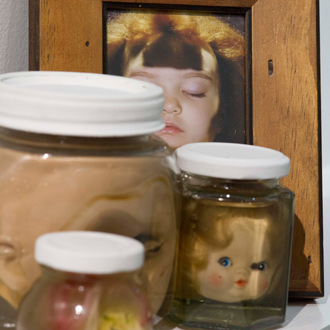 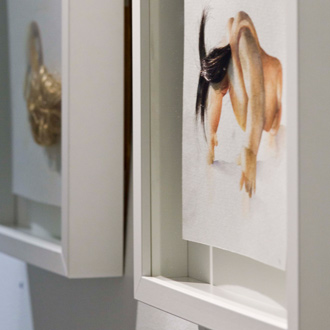 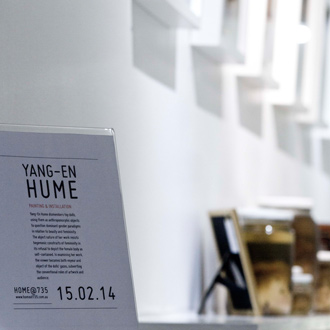 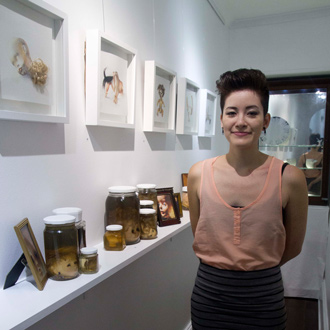 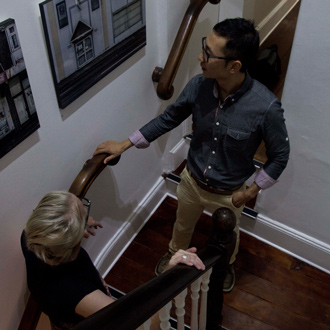 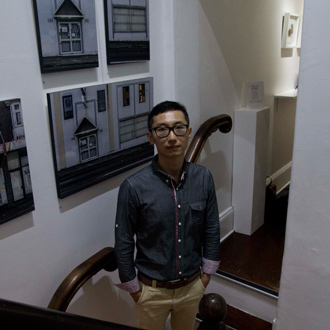 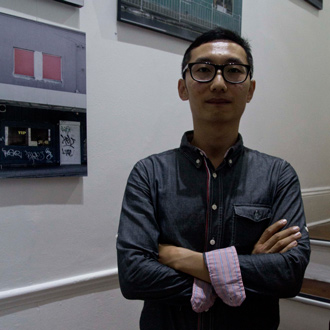 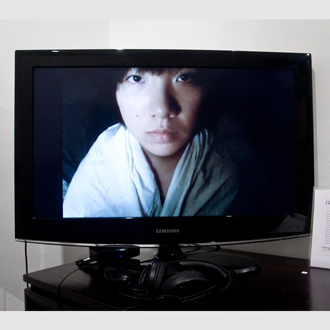 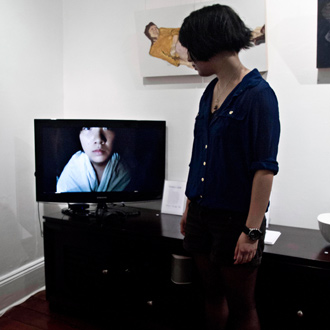 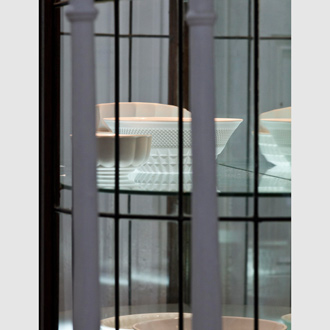 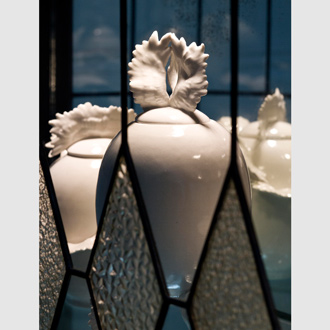